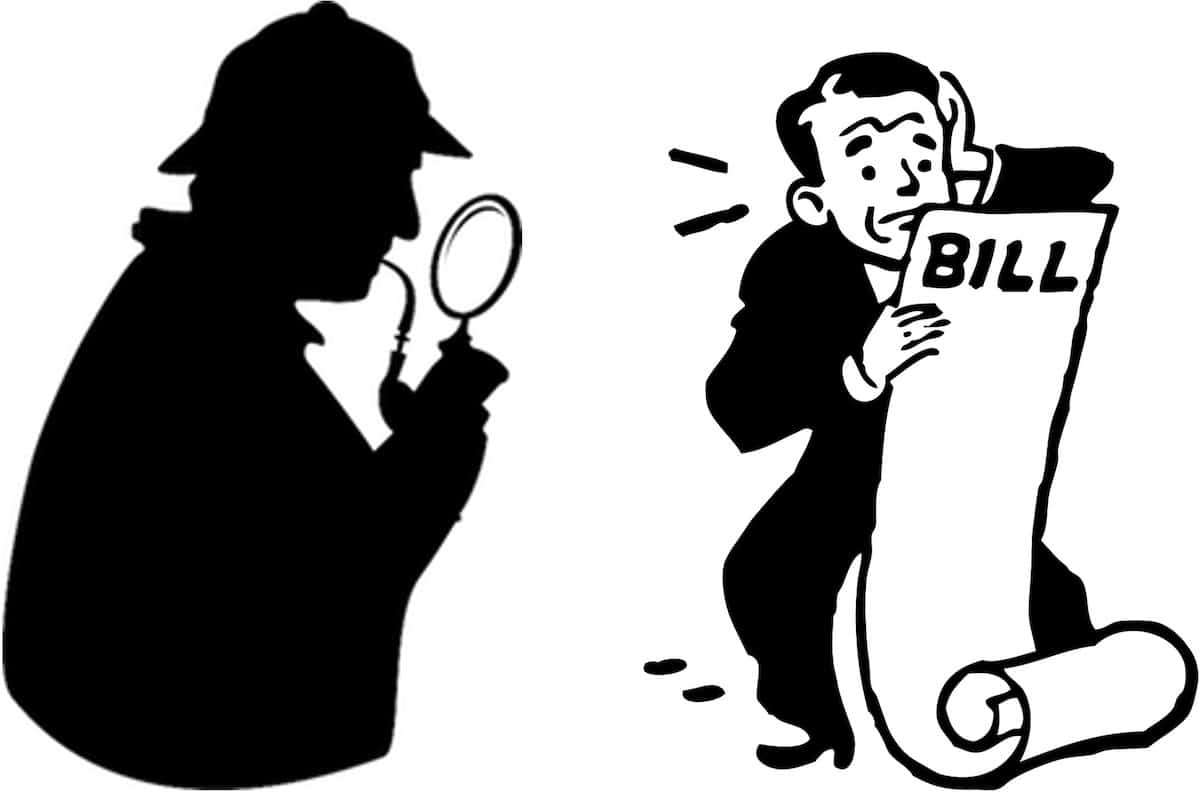 The CEO called.  “I need you to go down to Mexico right away.  They aren’t paying their invoices and suppliers are stopping shipments.  Our manufacturing lines are going to stop.  I need it fixed right away.  Get those bills paid now.”

What on earth was going on?  Why didn’t the site just pay their bills?  This shouldn’t be a big deal.  And this was their problem, and responsibility, not mine.  But as with any crisis situation it’s all hands on deck to get the problem fixed.

Little did I realize that while on the surface this seemed like a simple problem, and solution (ie. just pay the darn bills), the reality would prove to be much more complicated.  This would be a case for a Supply Chain Detective!

My immediate thought was to call the site to find out what was going on.  Their backlog of unpaid invoices was huge.  They had unpaid invoices that were as much as 9-12 months past their due date.  And the pile was growing bigger by the day.

Suppliers were calling the site, and anyone else that they could get ahold of. At first they were given assurances (without any follow up action) that their invoices would be paid.  But more and more weren’t paid.  And as Suppliers continued to call back demanding payment the Buyers and site personnel started to ignore their calls and emails.  This only made the Suppliers more upset, and several of them even started calling OUR Customers to complain.

This is how the problem got to the CEO.   Several Customers independently called him complaining about this.  The threat of losing business was real.  This was a catastrophe.

The Buyers and Supply Chain folks were overwhelmed.  On the one hand they were trying to do their day to day jobs including planning, order management, and securing parts supply.  And on the other hand their daily routines were increasingly interrupted by a growing outcry from Suppliers about the lack of payment and the demand for action.  All they could do was refer the problem to Accounts Payable.  They didn’t have the time, or focus, to handle every invoice problem.

Paying invoices was usually done by Accounts Payable, which was managed centrally in the Corporate office.  But they were not always easy to reach.  And they were dealing with Invoices and issues from every site around the world, not just the one in Mexico.  They would say that they were following their processes.  If there was a problem with an invoice it would certainly go unpaid.  It was not their responsibility to fix the invoice issues; it was just their job to pay the good invoices.

And so the problem went round and round the organization.  But at the end of the day the problem remained, and was growing.  We theoretically owed hundreds of suppliers millions of dollars for thousands of invoices that were months past due.  The Suppliers, and Customers, were on the verge of shutting us down.

Why couldn’t we just pay these invoices?  We were going to have to do a deep dive of the situation.  And we would soon find that the mystery was only going to get bigger.

A colleague of mine, a phenomenal veteran in Supply Chain, was asked to lead the project with me.  We got on the phone with the Supply Chain team in Mexico to try to get our arms around the problem and develop an action plan.

It became obvious that just asking them to pay the bills was not going to work.  They themselves were confused over the number of aged invoices, the amounts, the metrics, the issues preventing payment, the critical parts being held hostage by suppliers in exchange for payment,  the problems preventing payment, processes, and responsibilities.  They were caught in the hurricane and they couldn’t see a way out.  In utter desperation they admitted that they didn’t know what to do next.  The pressure on them was monumental.  They were crying out for help!

We realized that the site could not do this alone.  In fact my friend and I couldn’t do it alone.  The situation was too dire, the threat of failure too real and too imminent, and the mystery too big.  We required an “All Hands on Deck” approach.  As such we resolved to quickly recruit many subject matter experts to our team:  we needed the best and brightest from Finance, Commodity Management, Accounts Payable, Supply Chain and I/T.  In essence we had everyone on board that we should need to get to the bottom of this situation.

We also realized that we couldn’t do this remotely.  We had run reports and crawled through the data but we still couldn’t make sense of what was going on.  We needed to be on the ground, at the site, with the entire team of experts, working in “War Room” mode to solve the problem as quickly as possible.

We all booked our flights.  For the foreseeable future we were all committed to spending our time in Mexico solving the Case of the Unpaid Invoices.

Searching for Clues at the Scene of the Crime!

There were over 5000 past due invoices and the number was growing at an alarming rate every single day.  The patience of the Suppliers, the Customers, and now our Executive team was razor thin.  We had to act fast.

When problem invoices were logged into the system there was a very basic, rudimentary reason code provided.  Invariably the descriptions were insufficient and the next steps for resolution were vague at best.

With the help of our I/T team member we quickly created a pareto chart of the reason codes that were in the system.  We would have to deep dive this sooner than later but the basic analysis gave us something to work with.

The result however was rather discouraging.  There wasn’t going to be one silver bullet to solve this case.  The pareto showed a huge number of different issues:

This was going to take a lot of time and effort to solve this case.  While there was a clear pareto (ie. the top 5 issues made up about 70% of the problem) we would have to solve every issue.  No supplier wants to hear they are not going to get paid because their issue is not at the top of our pareto chart.

Solving the Case of the Unpaid Invoices!

We decided we had to quickly prioritize and resolve a bunch of issues to buy us the time we would need to do the deeper, intense analysis and problem resolution.

As such we focussed first on the Pricing discrepancies.  If the extended price difference between our PO and the Supplier Invoice was less than $50 we would just pay the Invoice outright.  The overall value involved was in the tens of thousands of dollars but the cost we would add and the impact to the company were nominal in comparison.  This action alone allowed us to quickly resolve over 1ooo invoices.

We then put someone in place to be our focal point to handle all Supplier queries.  They were to listen, provide informed updates, record actions, make commitments, and schedule follow up calls.  We had to proactively provide support to our valued Suppliers.

Next we turned our eye to Supplier invoices for which the lack of parts supply would shut down our Manufacturing lines entirely.  The cost impact there would be monumental.  We set aside a couple of folks to crawl through these one by one with the sole intent of finding, and fixing, every single problem on those invoices.  This will help turn down the heat in the kitchen.

In this way we proceeded down the list of every single non-payment reason code.  We assigned members of the team.  They crawled through invoice by invoice.  They resolve problems where they could and advanced the invoice through our process.

We updated our past due Invoice reporting every day with the latest numbers.  After a few weeks, despite all of our efforts and all of our solved invoices, the backlog was now over 6000 invoices.  What was going on?

At that point we had to start looking at the open purchase orders and invoices that we were expecting to come in, but had not as yet come in.  The problem was that while we were addressing everything that we could see, all of the problems and issues still existed in all of the future purchase orders and invoices.  It felt like we were pushing a balloon.

So we went back to where we started.  We did another analysis of pricing discrepancies, increased our hurdle rate, and authorized the payment of another large slew of invoices.

Then we decided we had to get in front of the problem once and for all.  We needed to tighten our processes, training, and education for our Supply Chain and Finance teams.  I/T was critical as well because with advanced analytics we could provide reporting that would forecast where we had discrepancies before they occurred.

Our education process started to take hold.  All Purchase orders had to be executed in the system, and no longer just on the phone or on a piece of paper.  We needed Supplier acknowledgement of every Purchase order including verification of pricing, terms and conditions and all of the other administrative details.  If there were discrepancies they were to be dealt with then and there.

We also tightened up our processes regarding MOQs, how to handle quality issues, expectations for overseas shipments, tax issues and more.  Again we had to deal with every issue if we were to fix this problem in a sustainable manner.

Weeks turned to months.  But slowly our efforts paid off.  The backlog started coming down.  The rate of recurrence of issues on new Purchase Orders and Invoices was dropping.  Suppliers gained more confidence that we were sincerely working to get this resolved.  Employees felt better informed and educated on how to get this stuff dealt with.  More importantly our Employees were spending less time dealing with irate Suppliers so they could focus on dealing with any problems early and upfront before things got out of control.

Within a few months we had reduced the Invoice backlog by over 75%.  It was now at a manageable level for the site and consistent with Industry benchmarks with similar activity levels.  Our focus on process, education, training and responsibilities became a model we would roll out to all other locations, to proactively make sure that the problem wouldn’t appear elsewhere.

At the end everyone who was involved was invited to a celebration event.  We thanked everyone and recognized their individual, and team, contributions.  Everyone had worked long, long days for many months, many of them far from home, to achieve these results.  We could not have fixed the problem without bringing our brightest minds to bear … our Supply Chain Detectives!

And with that the Case of the Unpaid Invoices was solved!