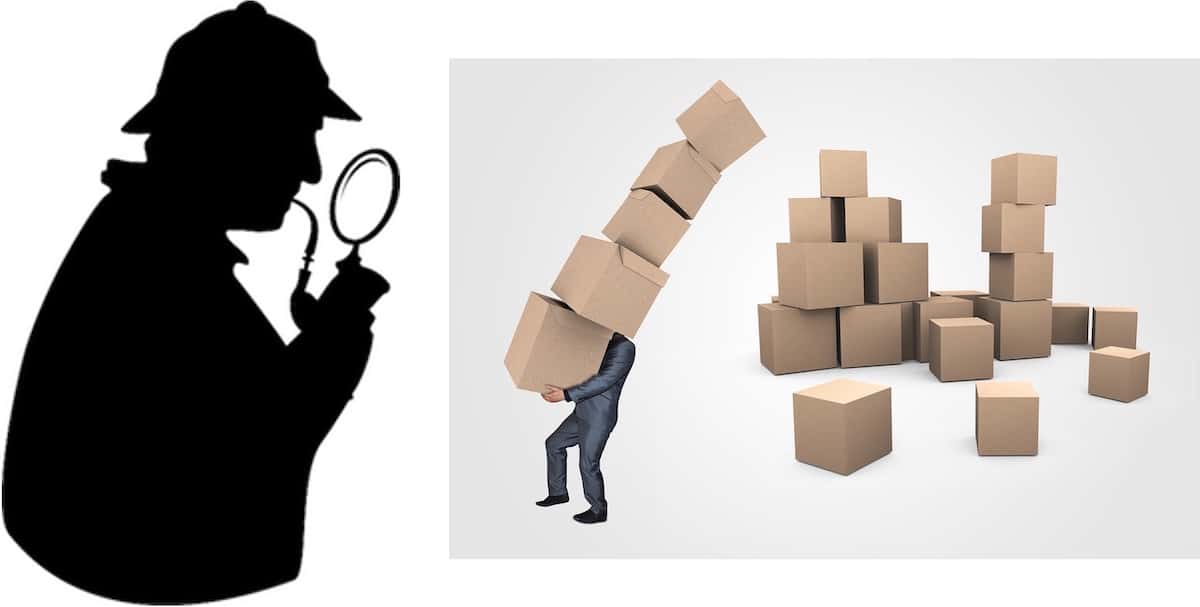 It was early September and I was sitting in my office preparing for a meeting. I was in the Retail Industry which meant that in Supply Chain this was the beginning of the frantic Holiday season. The last thing we needed was a Distribution Centre disaster.

Products were arriving at our Distribution Centres from all over the world at an unprecedented rate so that we could in turn send them out to the Retail stores over the next few months.

We were anticipating receiving more goods than ever but as it was my first year in Retail I had been assured by my team that we could handle the load.

As I sat there my Distribution Centre leader called me.

“Mike, We are out of space already. We have no more room to receive anything else.”

My heart sank. This was catastrophic. The goods we had received so far were just the tip of the iceberg. We had a real Distribution Centre disaster on our hands.

This was a case for the Supply Chain Detective™.

The company was diversifying its product base. In the past there were a very standardized set of products that we offered: books.

Sure there were hundreds of thousands of different books but from a logistics standpoint there was a well understood way of handling them.

They were received mostly from local suppliers. They were stored on shelves. They come in a variety of sizes but they are all rectangular and of a given thickness.

And the number of books planned to be sold can typically be easily translated into workload and space planning numbers that are within a reasonable level of accuracy.

This stuff was easily understood.

But now the company was diversifying its product portfolio. With the advent of online competition and e-reading it was critical for the company to expand its product offerings to survive.

The Merchants were now adding all kinds of different products into the portfolio. Clothing, toys, household items, electronics, games, seasonal items, and more now became part of the offering.

Much of the product was sourced from vendors all over the world, most significantly from Asia, where the company had absolutely zero experience in sourcing, supplier management, or logistics.

Some of the product was designed by other companies and some by our company. Regardless none of it was returnable if it was unpopular. It all had to be sold.

On top of that because the products were new there was no historical reference point for planning. Merchants ordered the amount of product that they needed to meet internal objectives for growth from one category to the next.

To complicate matters further there was no real understanding of space implications for storage and materials movement through our Supply Chain. Books were easy.

But how much space does a scarf occupy versus a candle or a kids backyard slide? Did anybody really know? The answer in short was NO!

When asked however the Supply Chain Inventory Planning team was confident that we had enough space. They had been using their models and were assured that all would be fine.

The Distribution Centre management team was equally confident. They had gone over the estimates of the number of containers and boxes coming in and they felt that they could handle it all.

From mid August onward tractor trailers started arriving in enormous numbers. The team started groaning about the amount of product they had to handle. The backlog in receiving was building.

And then in early September I got that call about the Distribution Centre disaster.

See also  What's the Difference Between Fulfillment and Replenishment?

What had gone wrong?

I had to see what was going on for myself. I drove over to the Distribution Centre, saw the enormous backup of tractor trailers waiting to get to the docks, talked with the DC leader, and then headed out to the warehouse floor.

First I went to Receiving and talked to some of the people in the area. There was no question that all of the new types of products were overwhelming the system.

We had installed Cubiscan systems to accurately measure the size of each item. We quickly found out that virtually all of the measurements that were entered into the system were wrong: height, width, depth, weight, package size and quantities per case.

The result was that we had vastly underestimated the amount of room required to handle and store these goods. Every single SKU would have to be remeasured at Receiving so that we could get our databases back to normal. A quick call to the Supply Chain team resulted in an Emergency team being put together to handle this vitally important task immediately.

The Receiving area manager told me that aside from that we had run out of case and pallet racking space to hold all of the goods. That was a massive issue. The line of trucks outside was just the beginning. We had tons of containers still coming in from overseas on boats and on trucks headed for the Distribution centre over the next 2 months.

I started walking up and down the warehouse aisles row by row to see for myself. There was really no other way to do it. There were some empty spaces but they were already spoken for by the goods sitting on the docks.

I was surprised however by the number of empty racks and sections because of racking damage, storage of old and dusty maintenance equipment, old products, and records retention for headquarters. These things alone accounted for over 10% of our storage capacity. We made a few calls and had all of this stuff taken off site and stored in trailers for now. And we made quick plans to properly repair the damaged racking.

On top of that we added some more racking to the ends of the existing aisles and along the back wall. It wasn’t much but it helped.

But there was still no getting around the fact that we were out of space. We analyzed the profile of the goods we were now receiving. Given that there were a fair number of bulky, space consuming products in the new product portfolio which would not be needed in stores for a couple of months we decided to rent storage space offsite. These bulky items were using the space which we needed for faster moving goods in our Distribution Centre otherwise. Stored offsite we could pull the bulky items back as needed in the future while relieving a significant amount of storage space.

We also decided that we would have to work 24-7 for the next few weeks. We got Human Resources to quickly recruit people for weekend and over night shifts and moved some management resource there for coverage. Overtime was instantaneously authorized as well. We could not afford to lose a single minute of time.

Within a couple of weeks we were eating into the backlog at Receiving. But we started hitting the space constraint again and we were still not quite through the onslaught of incoming goods.

It became apparent that the Merchant team had been over-ordering their goods above and beyond the plan. They wanted to exceed their sales forecasts. That was great except for the fact that they didn’t tell anyone else that even more goods were on their way than what was planned for.

To make matters worse the Supply Chain team that was controlling the release of orders to the Distribution Centre for fulfillment and replenishment were holding back on releasing those orders. They were waiting until the DC had received all of the goods which only made matters worse. And given the backlog in receiving that we were already unable to process the lack of release of orders compounded the problem.

We made the decision with the Supply Chain team to immediately release orders for all, and as many, goods, as we could to ship to the stores. This would allow us to move goods out of the warehouse and help take the pressure off of the constrained storage situation.

But then we found that the fulfillment and replenishment strategy had been to provide orders by unit quantity, according to the size and needs of each store, and not by case quantity. That meant that we were opening virtually every single case, pulling out the quantity needed for each store, and then putting the rest of the broken case back onto storage shelves for subsequent order fulfillment. Nobody had planned for this. Now all of our small case storage shelves were filled to overflowing.

We had to make another quick decision. We would override prior plans and fulfill all orders by case size everywhere possible. This should have been the policy and practice from the beginning but it wasn’t. It only makes sense … reduce the amount of product handling to the absolute minimum.

We expanded the amount of product that we were sending offsite for temporary storage as well. We needed as much contingency as possible.

After a month we had the backlog at Receiving under control. We were receiving trucks as they arrived. There was sufficient empty space in the pallet racking to handle our daily needs.

We pulled back the goods that we had stored offsite as we needed them. And as they were bulky items when they came back to our warehouse we re-routed them directly to shipping. Certainly it was extra handling but the offsite storage solution gave us the breathing space we needed to get through the disaster.

But as the DC leader told me, if we hadn’t done that detective work to find out on the floor what was really going on, and then taken all of the immediate steps we did, we would have ground to a halt and blown the entire Holiday season for the entire company.

As it was it turned out to be a record Holiday season. We learned some hard lessons very quickly which we would apply in the future to make sure this situation never happened again.

But the solution to the Distribution Centre disaster required a lot of work by the Supply Chain Detective™.