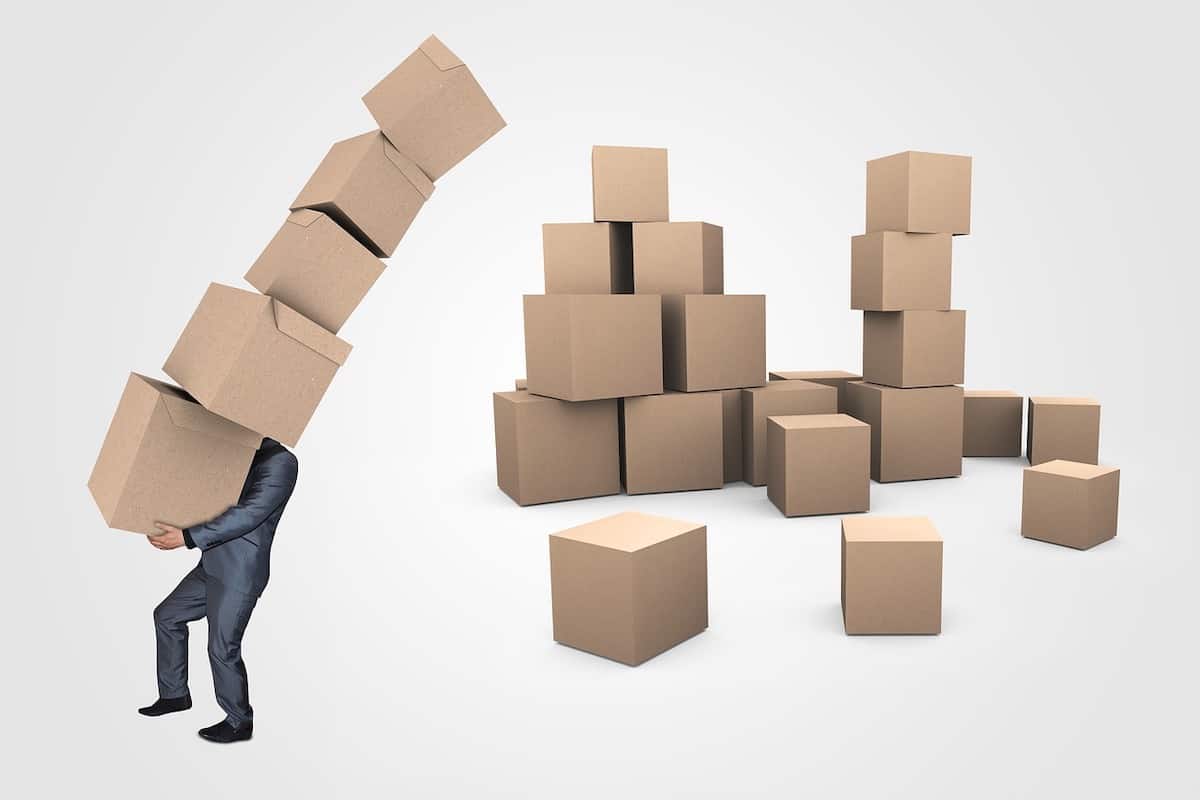 “What?  We’re only in the middle of September.”

“The receiving docks are backed up.  We have trucks in the parking lot waiting to unload their goods.  There are even more containers on their way.  And we have no empty space left in the warehouse racking.”

That was the actual conversation I had with the head of the Distribution Centre (DC).  We had a big problem on our hands to say the least.

Getting out of the Immediate Mess!

If we couldn’t receive goods at this time of year we would basically destroy  any chance of success for the company in the Holiday season.  Because if we don’t have the goods in the Distribution Centre we can’t ship them to stores and we can’t make them available for Online sales.

In order to solve the task at hand we broke the problem down to it’s basic elements.

First of all we needed to find more space.  For excess inventory that was not needed for initial replenishment and product availability we would keep goods in trailers in the parking lot.  Additionally we would ask our carriers to keep inbound containers at their yards until we needed the particular goods that were in them.

Any “dead” storage such as records retention and old items were moved into trailers.  Damaged, unusable  racking was repaired.  We added some additional racking in previously unused areas.  And finally we quickly rented space from a third party we knew that had ample space to store a lot of the bulky and slower moving goods.

We also sought help from an offsite record storage company so we could make better use of our space while protecting and securely storing the record files that were no longer an active part of our daily operations, yet still needed to be retained.

This kind of breakage from having our goods in multiple locations was not ideal.  And it certainly would result in higher cost and lower productivity.  But it solved the immediate space constraint that we had.

Next we worked to accelerate allocation and replenishment to retail stores.  This allowed us to move out goods a little quicker than we would have done otherwise.  But it served to also relieve some of the pressure on our space.

And finally we asked our employees to work more overtime.  We had to get the goods received and in stock.  Only then would all of the systems for allocation, replenishment and sales kick in.

It took a few weeks to put all of this in place but we got it all done.  We struggled with space constraints for a few months until after Black Friday/Cyber Monday sales started going out the door.  By early to mid-December we could finally see empty space in the warehouse racking again.

But it was a stressful and costly period.  And it should not have happened in the first place!

Figuring out how we got in to that Mess!

So how did this happen?  The head of the DC and I had only recently joined the company.  In all of our discussions about Supply Chain’s readiness for the Holiday season every one was confident that we were prepared.  Even though there would be great growth from the year before no one seemed fazed.

In retrospect we didn’t get into enough detail to test out the assumed level of confidence.

The company was adding dramatically different product lines than ever before.  These new products had a much different profile from what was carried historically.  These products came in an endless number of shapes and sizes.  And none of the cubic measurements for the products was known let alone used for space planning.  We had only just received new cubi-scan machines.

While volumes were lower than historical products, due to the new nature of this business, the products came from suppliers around the world.  As such we received container loads of goods with the entire volume for the whole season on board.  Historically most of the goods were supplied locally so that we could order and received on more of an as needed basis.

And the new products had much different rules for assortment and replenishment.  Without any data on historic sales, and with the highly seasonal nature of the new products, it made most sense to keep the majority of goods in the DC until we saw which channels sold the products better.

Further there had been no predefined planning calendar indicating when goods needed to be received in the DC in order to support the execution activities.  Buyers ordered goods with at best general direction as to roughly when goods should arrive at the DC.  Needless to say everything arrived at once, and far too late to allow the DC a sufficient amount of time to process everything.

It also turns out that there was no real space planning done historically.  Given the previously static nature of the business there was only some rudimentary, high level estimation of the number of pallets that would be received and moved.  There was absolutely no consideration taken for cubic space requirements and the racking configuration of the warehouse.  None of the other dynamics described above were taken in to account at all.

Finally there was just a lack of communication.  There were no checks and balances to ensure that we had done the detailed level of work to ensure we were ready.

We got through that Holiday season.  We handled record volumes and record sales.  Our E-Commerce sales continued to grow at double digit levels.  In short the team did some herculean work to make it all happen.

But we did all of this at an extremely high cost.  Not only did our productivity suffer but it was far more stressful on everyone than it needed to be.

Everyone learned a valuable lesson.  We were going to have very detailed analyses and plans to ensure we never had a space planning issue again.  We would also ensure that we had the same level of diligence applied to all resource planning.

We were going to be so good at planning and being proactive that the next Holiday season was going to be “boring” and more stress-free from a Supply Chain perspective.   We knew it would be busier than even the year we just completed.  But we would be more than prepared for anything that came our way.