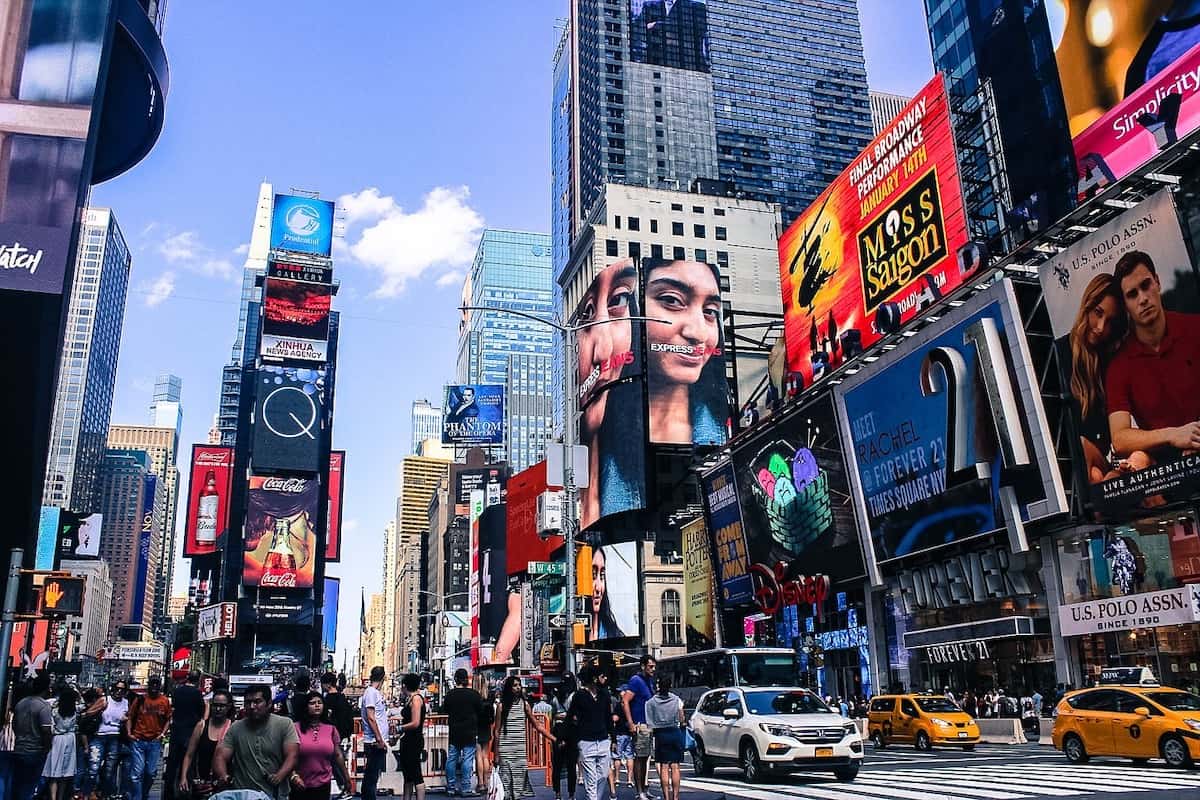 Outdoor advertising refers to any ads that are seen outside the consumer’s home. It typically includes things like billboards, posters, and other signage, but there are many ways to get a message across in the public sphere.

Many outdoor advertising campaigns are created specifically for urban areas (and the large populations that dwell there), but what are some of the most effective outdoor advertising strategies in general? And how can they be used differently in a variety of locations?

Here are 5 effective outdoor advertising strategies and how various cities have used them to their advantage.

The City of Angels has stuck to the classics in their abundant use of billboards. Often thought of as the old stand-by in the advertising world, billboards have an incredible amount of diversity and impact, even in the digital era. Los Angeles is a city of commuters and tourists, thus traditional roadside advertisement does wonders for brand recognition and sales.

However, LA isn’t just resting on its laurels, this innovative city has taken its billboard ads to the next level with incredible displays of creativity and artwork. For example, digital billboards have allowed advertisers to add moving elements into their visuals, upping the already eye-catching imagery immensely.

One of the cities most famous for its profusion of advertisements is, of course, The City That Never Sleeps. Outdoor advertising in New York is known for being a bit grungy and in your face. This is likely due to NYC’s use of street furniture as a means of advertising.

See also  Is Covid-19 the Death of Global Supply Chains?

“Street furniture” is a collective term for things like benches, kiosks, telephone poles, mailboxes, bus shelters, street lights, and other fixed objects. New York has been masterfully using such equipment for advertising for as long as it’s been on the map.

This strategy targets pedestrians, which is great for a city like New York. It also has the added benefit of being extremely versatile and easy to achieve. With the use of labels or QR codes, ads no longer have the text/size limits that they once had, making this method the perfect combination of outdoor and digital marketing.

Another classic advertising strategy that has a big impact on consumers is the use of public transportation spaces. Chicago has one of the most robust public transit systems in the United States, and as such, has been able to utilize its subway (known locally as the El), its bus system, and even the local taxis as a way to spread commercial messaging citywide.

The train stations, railcars, and buses have an abundance of inexpensive ad space and a near constant influx of passengers. The Windy City also has a large number of taxis and shared car services that have also jumped into the fray with both inner and outer displays available for rent. Transit ads are extremely adaptable, and perhaps, even more importantly, they’re mobile, reaching a wider audience than any other form of outdoor marketing.

As one of the most influential cities in the South, Atlanta has focused on creativity and innovation with regards to its outdoor advertising strategies. One of the more modern approaches seen throughout this capital city is the use of sticker marketing.

For cities with a younger vibe, stickers are a great choice as individualism and customization have become extremely trendy in recent years. Stickers are also great for turning customers into brand advocates. People love getting something for free and if/when they feel they’ve gotten a bit of added value (like in the form of a free sticker), they’re more likely to sing the praises of that particular company. You can order cool die cut stickers or other custom stickers easily online.

Stickers are also one of the more permanent forms of outdoor marketing. Once placed on a laptop, car, water bottle, you name it, it’s likely staying there until the object is replaced.

While it might sound a bit aggressive, guerilla marketing is a unique and typically low-cost option for outdoor marketing. Guerilla marketing refers to the use of surprise, unconventional interactions to garner publicity.

There’s quite a bit of guerilla marketing to be seen in Miami, such as street marketing, art installations, and event actions. A city with nice weather year round and a constant flow of tourists means that these varied, people-based techniques are feasible and effective. From flash mobs to flyers on your windshield, Miami advertisers will put in the work to bring diversity and a grass-roots element to their consumer base.

This strategy has proven to be particularly beneficial to small businesses, as the memorability factor is quite high.